1958-Born in California, I am the product of a loving, industrious and creative family (my Mom reads this).

1975-Took my first art class in my high school Junior year.  Quickly realized I could replace many difficult

school projects by offering the teacher a slide show, scrap book or something pretty instead.  Art soon

became my "go-to" trick.  It did have its limits though:  Not every teacher would give me a 'B' on a 'C' paper

electronics engineer.  He'd overlooked one issue: I sucked at higher math.  I broke it to him that I

was going to be a "Graphic Designer."  I had no clue what this title meant, my art friends threw

the term around loosely, but to me it sounded techie enough for my dad to swallow and much

1976-Working the night shift at a mini-mart while attending Orange Coast College (Graphic Arts Major, but still vague on the definition), I came across an ad seeking pen and ink artists for Yellow Page ads.  $2.65 an hour, hmm.  It was a .20 an hour cut in pay, but then it had benefits: I wouldn't get shot there.

1977-Accepted to Art Center College of Design, Pasadena, as an Illustration Major. Lived on coffee,

peanut butter and 5 hours of sleep a night.  Also learned to paint, cut mattes and cat-nap while driving with

one eye.  Graduated with a BFA in 1981.  Designed and painted cute greeting cards to pay for tuition.

And just for youthful brilliance and timing, get married too.

1982-Landed a full-time art job at KNBC Los Angeles, primarily to end the horror of designing teddy bear and kitten greeting cards. Painted graphics for news stories- about 1500 in all, on every subject you've ever heard on the news.

1984-The best daughter in the world is born.  Turns out she needs food and stuff.

Top of the art pay scale at KNBC can't cut it. Hired by DIC Animation development

Also during this time I was adjunct faculty at UCI and Irvine Valley College, teaching

painting techniques to others like me who wanted to escape a career in engineering.

Accepted two Silver Awards for "The Best In Dimensional Illustration Worldwide."  My sculptures and 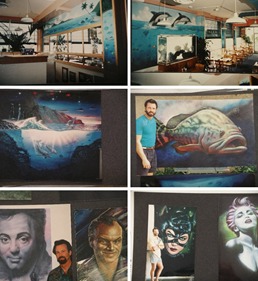